Welcome to the weekend, gang!  After a long, hard week, there is really nothing more relaxing than putting your feet up, having a “cold one” in your hand and catching up on some the things you have missed.  Whether it is breaking your back, chasing after the kids or sitting in front of a computer, everyone needs a little R&R at the end of it.

Let’s get this weekend started right!

Johnny Cash: American Rebel, A unique documentary about the singer, is slated to make its debut on Sept. 12, 2015 on CMT. The film will highlight the musical and social impact of his music by using 12 of his most important songs as its soundtrack.  The film will be the first time that both Johnny and June’s children have appeared in a film about the Man in Black.  The documentary also includes interviews with a variety of country music legends.  So if you are a Cash fan, you may want to tune in to it.  It promises to reveal some unknown sides to this American legend.

A big congratulations to Kelly Clarkson and family on the announcement of baby number 2!  She and husband Brandon welcomed their daughter River in to the world in  June 2014.  Clarkson, who got emotional while performing at the Staples Center in L.A. on Wednesday night, “spilled the beans” that she was pregnant to the crowd.  She explained, “I just don’t want you to think I’m on pills or drunk or something.”  All the best to Kelly, Brandon and little River!

In an interview with Entertainment Tonight, Chris Young spoke about what it was like to be implicated in the Blake/Miranda divorce.  Young, who is friends with both of the stars, was quoted as saying, “It’s just so weird getting pulled into something like that where it just wasn’t true.” and he even went so far as to say that he was in constant contact with Shelton as the news broke that day.  The unfortunate rumours apparently have not affected the relationship that Young has with the singers and he maintains that they are all still really great friends despite this.  Young also said, “…That’s kind of a by-product of doing this and being in the spotlight, I guess.”

One essential item that makes up the country ensemble is the faithful trucker cap.  Originally seen worn by truckers in the 70’s, these foam-fronted, mesh-backed hats were usually adorned with some sort of advertising.  It was inexpensive to produce them and they provided comfort for the driver, with the bill shading their eyes from the sun and the re-sizable mesh allowing the head to breath.  As the times changed, so did the hats that people were wearing.  Yet somehow, in the early 2000’s, the trusted trucker hat made a resurgence out of irony.  The hats represented a blue-collar lifestyle, yet the people who reignited the trend happened to be celebrities and suburban teenagers.  As celebrities adopted the style more and more, so did the rest of the world.  And thus, ladies and gentlemen, is the rebirth of the trucker hat.  Of course, in true country fashion, if I am going to feature a picture of this iconic cap, it HAS to be a John Deere:

It’s Friday and that means it is Rising Star day!  Today I would like to feature an up and coming musician out of Halifax, Nova Scotia by the name of Andrew Frelick.  I spent many summers as a kid on the shores of the Annapolis River, so Nova Scotia holds a very near and dear place in my heart.  When I found out he was from out East – I HAD to write about him! A friend of mine turned me on to Andrew and once I checked him out, I LOVED what I heard.  His looks as dashing as a young Garth Brooks and a voice that has a beautifully clear and rich tone, Frelick is the total package. 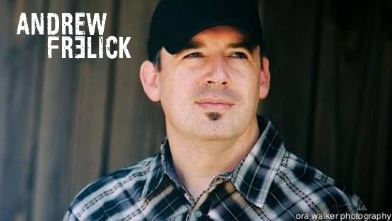 Andrew was given his first guitar as a child and was performing on stages by the time he was a teenager.  He has a natural comfort being on stage and this shines through during his performances.  He has written many songs on his own and has co-written many others with other writers as well.  He co-founded several bands while trying to focus on his own solo career and it looks like keeping focus on that has served him well!  He has had the opportunity to perform on stage with musicians such as Aaron Pritchett, TJ King and Carroll Baker.  His song, “Spread Some Good Time Around”, finished as a regional semi-finalist on CBC’s Searchlight 2015 contest and reached #18 on “The Iceman’s Top 40 New Artist Countdown”. It also debuted at #12 on “The Spectrum Top 40 Countdown”. Because of the popularity of his song, he was invited to perform in Nashville on June 14th during CMA Fest 2015 on stages sponsored by Robert Golomboski (The Iceman), Nan Cassidy of Tunesmith Entertainment, KORE PR, NStyle Country and 101.5FM THE ONE. This east coaster is really gaining some traction!

I sent Andrew a few questions this week and he was awesome enough to answer them for me!   So here is a segment I would like to call “5 in 5 with Andrew Frelick”:

Check out his website : http://www.andrewfrelick.com/  and follow him on Facebook: andrewfrelickmusic.  He also has a YouTube channel where you can find some of his videos.  If you are lucky enough to be in the area, here is a bit of Andrew’s upcoming schedule:

So to get your weekend kick-started here is “Spread Some Good Time Around” by Andrew Frelick: