I’ll Get Better – Cross My Heart

Let me apologize for my delay in posting. This summer has seen a few very exciting moments for us. A trip to Nova Scotia, Craven (a WHOLE post on it’s own), and the early arrival of my gorgeous niece, Presley Ann Margaret Roy:

She was born 6 weeks early, weighed 3 pounds 14 ounces and is already out of the St. Boniface NICU and at home at a WHOPPING 4 pounds 4 ounces. She is by far the smallest and mightiest member of our family and obviously we are completely in love! Our family would like to thank the staff at the St. Boniface Hospital for taking such great care of my sister and my niece. They were wonderful to all of us. No offence though, it is great to not have to see Presley there. We are so happy she is home.

Between all of this and some crazy weather cells that have been in the area lately, I am behind. But I am trying to catch up! So hang in there with me!

There are a few things that are quintessentially Canadian; our flag, our “monopoly money”, maple syrup and you certainly must include Stompin’ Tom Connors on to this list. In association with Canada 150, Anthem Legacy, which is a part of Ole Label Group,will be releasing the Stompin’ Tom Connors 50th Anniversary self-titled CD.

This will be the first ever Stompin’ Tom release that the Ole Label Group has done and it was released on June 30th. It can be purchased here:

Tom was born in St. John, New Brunswick and was raised in Prince Edward Island. He hit the road at 15 and over the next 13 years saw every nook and cranny of Canada. His iconic songs were stories of the places he saw and the people he met along the way.  He released 6 original albums with Dominion records before leaving to sign with Boot Records, where he recorded 10 more original albums. These works included Tom and a host of other artists.

Listening to this album made me feel…child-like. It reminded me of summers spent in Nova Scotia. I brought back fond memories of my Nanny and my Uncle Percy, who I miss dearly. It made me feel really Canadian. It made me feel like I was sitting in Nanny’s kitchen in Port Wade on a Saturday night while people dropped in and told stories and had a laugh. The songs are fantastic and stand up, but a song like “The Hockey Song” really has a special meaning if you are Canadian. There are four covers on the album and they are all really good. George Canyon’s cover of “The Hockey Song” strays a bit from the traditional Stompin’ Tom sound, but Corb Lund’s “The Consumer”, The Cuddy/Polley Family Band’s “Don Valley Jail” and Whiskey Jack’s “Algoma Central #69” maintain that feeling.

The Album is a phenomenal salute to an incredibly talented and iconic Canadian figure. If you are a fan, this should be a part of your collection. If you are just starting to explore traditional country, this is a great album to pick up. Stompin’ Tom could spin one hell of a yarn.

Let me start by saying, I am a fan of The Road Hammers. I also think Jason McCoy is tremendous. However, I am always prepared to be objective, even when it is someone I really like (I believe I said I wasn’t a HUGE fan of ALL of Blake Shelton’s last album, and we know how I feel about him). But this. This here. What the hell, Road Hammers! You guys totally blew my doors off! “Crazy About You” was the first single to come off The Squeeze and it is the first of some seriously bad-ass songs. 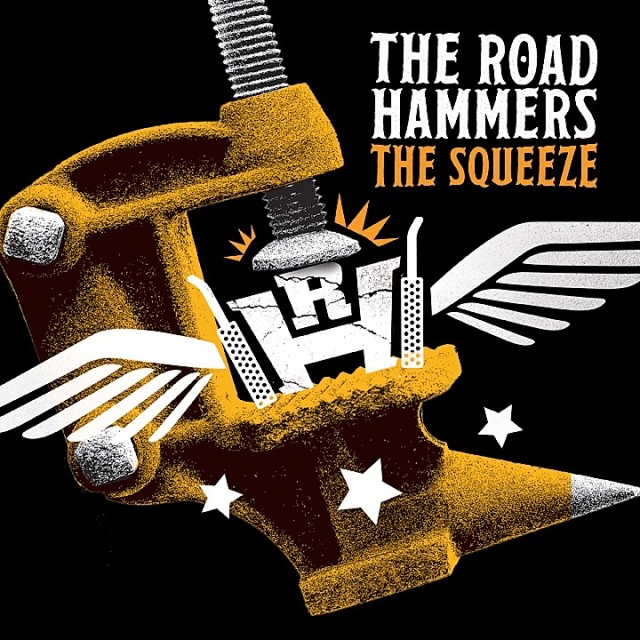 If you are looking for a ballad, you are in luck. “All Your Favourite Bands” slows it downs and wishes the best for someone…as only The Road Hammers can:

The album ends with “One Horse Town” featuring Tim Hicks. They damn near blew my Bose up! You absolutely can not listen to this song without turning it up. I tried. It is impossible.

Their latest single from this album, “Your Love Is the Drug” (another wicked southern rock song from this group) was released on August 9 to Canadian Country Radio. Trust me when I say it is another killer song!

How I am just listening to this full album right now? I have no idea. I am clearly an idiot. If you are a fan and do not have this yet – GO AND GET IT! If you are a southern rock fan – GO AND GET IT! I had a chance to catch them at Craven and they blew me away! I will tell you more of those antics later.  Just…get the album.

Little kids are funny. You can ask them what they want to be when they grow up one day and the answer can change from day-to-day, or even hour to hour. In the case of Amanda Sadler, the decision was made at a pretty young age. She started dancing at 4, piano at 6 and then started singing shortly after that. She then began performing with a semi-professional youth performance group.  The “common denominator” (the term Amanda used) in all of these, was music. At 13 she got her first guitar, “That’s when I kind of started songwriting as well.” A love affair was born. “Looking back from there, it’s something I have been so passionate about since day one.”

I asked what her parents thought about her wanting to do this. If there was ever an “enough is enough” moment. Amanda laughed, “They have been the most supportive people in the entire world. Sometimes it shocks me how incredibly supportive they are.” We talked about how parents seem to be more willing to support a child’s dream than let’s say in the 50’s. For example, if a son came home and said, “Hey Dad! Coach thinks I have a real shot at becoming a pro hockey player!” The chances are pretty good that Dad would respond with something similar to, “Forget the dream kid. You’re coming to work with me.” Now parents have more capacity to help the child attain that dream. Amanda made an interesting point, especially where the music industry is involved, “It’s a very interesting time that we’re living in now too because if you look back through the years, there was one way you would go about creating a career for yourself in the music industry. And today because of this amazing age we live in, with everything accessible online and stuff, there’s so many ways to go about building a fan base and getting your music out to people.”

Amanda’s latest release “Cross My Heart” is a wonderfully written break-up song. The video was released in June. The song is upbeat and carries this message of someone finally saying good-bye to someone. “I cross my heart you won’t cross my mind”. And good riddance! I asked her when we would get a chance to hear more. “We haven’t released any official details yet but there is definitely going to be an upcoming project coming out in the near future. That’s as much detail as I can give away right now.” So there is more to look forward to!

Her first EP Light in 2015 was written entirely on her own. “It was definitely just a huge learning experience for me.” It hadn’t really been planned that way. She just got along so well with the producer that, well, the EP kind of…happened. At the beginning of her career, a lot of her music was written solo. As she has gotten to know more people, she has embraced the experience of collaboration. “There’s just so many amazing people to collaborate with so I try to do that as much as possible now.” Amanda spent a couple of months in Nashville last year and plans to do the same again this year. She also has been writing a lot over Skype, “Writing is a definitely a part of my daily process, that’s for sure!” While she enjoys being able to write with people from all over, she admits, “It is probably the scariest thing in the world to go to a co-write on Skype with someone you’ve never met before!” She laughed and we talked about how you just have to learn to embrace that “awkward” feeling, “I’ve never met you before, we’re talking over the internet and let’s write a super personal song right now.” We both were laughing at this point. She added, “It’s something that has been a wonderful experience for me.”

I read Amanda one of her own quotes (she sounded a bit nervous…),

“They have my heart and soul in them, along with a lot of coffee and some seriously worn out guitar pics.”

She laughed. It turns out Amanda is a huge coffee fan. You’ll be interested to know that she is a fan of neither Tim’s or Starbucks, “I’m really big on supporting local”. Local for Amanda is Kingston, Ontario. It seemed only fitting that I asked for the low-down on some of her favourite coffee haunts. “In Kingston, my current favourite is Crave (http://www.cravecoffeehouse.ca). It’s a new coffee shop that just opened I think last year on Princess Street. And they are absolutely fantastic! It’s really a great little vibe in there. They do a lot of specialty drinks and stuff. Then in Nashville, oh gosh, there’s so many good coffee shops in Nashville. My favourite neighbourhood is 12 South in Nashville and they’ve got a really great little coffee shop, a little restaurant called Frothy Monkey (yes…this is its name, I listened several times and: https://frothymonkey.com/ – Looks AMAZING!). That’s probably my favourite breakfast and coffee spot down there. But there is another one called Crema (https://crema-coffee.com) and their coffee is to die for as well.”

Coffee and songwriting aren’t the only loves of Amanda Sadler. She is also very committed to philanthropy. She originally enrolled at Queen’s University to study Sociology to pursue a career in the non-profit sector. While at school, she worked her way up from being an intern to being the president of the Vogue Charity Fashion Show (http://www.voguecharityfashionshow.com). While doing this she volunteered for The Learning Disabilities Organization of Ontario. Now as an artist, she can work on both her love of music and giving back, “I’m really excited to donate my time as a musician to different organizations.” Her next target is mental health and looks forward to doing more work in that area.

It doesn’t seem like Amanda has much time to herself. When she does, you can usually find her…writing songs. Since it never feels like work to her, “A lot of the time in my spare time I am writing or collaborating with other musicians.” She quickly adds, “I’m also a really big foodie. I absolutely love eating out so much.” She tries to check out local restaurants as much as she can.

We had a great chat! She is not only talented but absolutely delightful. Catch up with her on all of her socials:

Please take a listen to Amanda’s latest single “Cross My Heart” then go pick it up!! I know you’ll love it as much as I do!