It Was A Very Good Year

I hope everyone had a fantastic Christmas! Not gonna lie, I’m a bit of a humbug. I don’t HATE Christmas or anything. It just makes me nostalgic and leaves me feeling a bit sad usually. So I try to focus on the fun stuff like parties and things like that. With my niece Presley here, that changed a lot. She really brought back my Christmas spirit. I know she is too young to get the whole thing yet, but watching her with the lights and different textures was fun.

This time of year usually brings The Voice. And, as always, I was right in there like a dirty shirt (as you saw in my previous post)! I made another big move on social media and apparently a few people saw it: 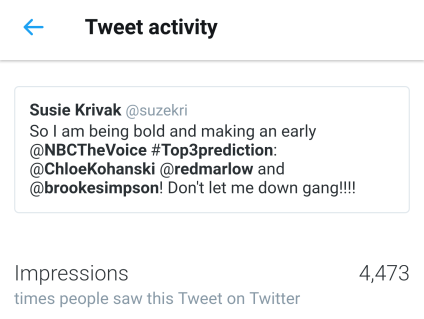 The thought that this many people have seen this blows my mind! It goes to show you how strong social media can really be. I enjoy being involved! It makes me feel like a part of the action. When I tweeted #Voicesavered, my phone went crazy with retweets trying to save our beloved Red Marlow. Incidentally….my top 3 predictions were Chloe Kohanski, Brooke Simpson and Red. Chloe triumphed as winner of season 13 of The Voice and with good reason. She is AMAZINGLY talented. I was glad to see a woman bring back some kick-ass female rockers.

Let’s move on to some country!

This year brought with it some great music and some great Canadian country music highlights:

This is just a few. I could go on for days! There are a few people who are also on the rise and you should keep an eye out for in 2018:

I am not even going to lie to you. I had to apologize for fan-girling a bit with this call. Jessica Mitchell is by far one of the most talented and heart-felt songwriters in Canada at the moment. She is honest. She isn’t afraid to take a song to a place where it may hurt to hear it. Hearing her work is moving.

The release of her single Workin’ on Whiskey and the 2016 CMAO Awards were really pivotal for her, “They really kicked off this spiral of really amazing moments.” This year, she received 4 nominations at the CMAO Awards and momentum keeps building.

We spoke a little about Workin on Whiskey. There are few songs that affect me emotionally enough that I feel like I need to stop driving if I’m behind the wheel; Make You Feel My Love by Garth Brooks, Don’t Take the Girl by Tim McGraw, Either Way by Chris Stapleton and this song. Every part of it touches me. “I appreciate the response I got to that song and people connected with it which is great because I connect with it equally as much.” Jessica added, “It takes me to a different place and I wouldn’t have it any other way.”

In May of this year, Jessica released 2 back-to-back singles. Jessica had great success with both of them. Don’t Love Me is this sad but beautiful break-up song. It carries a tone of ‘don’t ask me to come back because it would be hard to say no’. I asked her to tell me a little bit about that song. “We decided to let the song speak for itself and I love the different interpretations I’ve been getting from people as to what it means to them.”

The other single is this dreamy, ethereal piece called Tear it down. An extremely relateable song, “it’s mostly about taking the power back in your life when you’ve been stuck in a situation that’s just not good for you.” The song is meant to be empowering and Jessica admits, “Every time I sing it, I feel very empowered.” The title itself is a great explanation of the song, “Sometimes you need to tear down all the walls and start from scratch.”

This brought up an interesting question. I asked her if she ever thought of starting from scratch, meaning, giving this up. She burst out laughing. “Oh My God Yes! Many Times! Recently! There’s a point where it all comes to a head and you think ‘Ok. This is it for me.’ And its very relative to what’s going on in my life.” 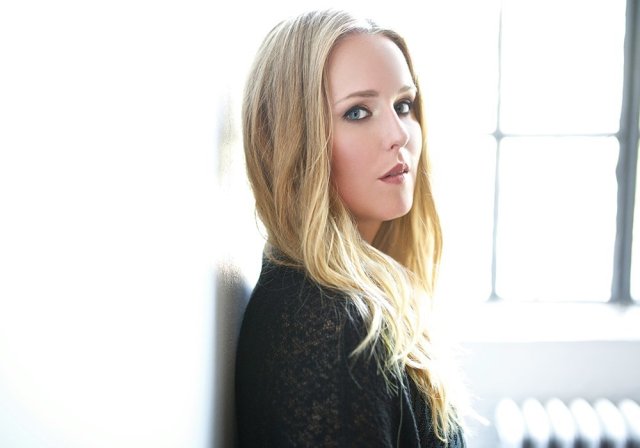 I for one am so glad she decides to keep striving through those tough times. All of that hard work has proven to be successful for her. I asked her how she is taking all of this in. She laughed again, “I don’t know! I’m just taking it in stride.” Everything has snowballed I’m the last year and a half for her so she points out, “I relax when I can and work when I’m supposed to work.” Jessica is quick to share her accolades, “Regardless of what happens, I’m really proud of myself and my team and the people who have worked equally hard to make this happen.”

This year, Jessica went on the road, opening for Ron Sexsmith. She drove out west and back by herself. “That was an extremely eye-opening and soul-searching experience for me and I don’t even know how else to describe it.” I asked if we could expect some songs from her adventure. She replied, “I got tons of things to write about, that’s for sure!” We certainly can’t wait to hear them.

When people have hectic schedules like this, I always find it interesting to find out what they do in their down time. Jessica jokes, “You know, my life is very boring. I love going to live shows. I go to a lot of live shows here in Toronto.” Jessica is currently splitting her time between Nashville and Toronto. When she is actually home, she spends quite a bit of time there, just hanging out on her patio (in the summer of course) and spends a lot of time reflecting. “I feel like in this business its really important to take time for yourself because you’re almost never alone but you still feel kind of lonely.”

Although she tries to use some of that time to reflect, Jessica admits fully, “I am a Netflix bingeing nightmare.” I had to laugh at this knowing Frank and I are suckers for this too. Much to my surprise, we binge on similar treats, “I’m such a nerd. I love fantasy and superhero movies and stuff so I go to see as many of those as I can.” Something else you may not know is, “I have a crazy eclectic taste in music, like ambient and strange.”

I knew in had to wrap things up but there was a question I really wanted to ask Jessica. All of this deep and thoughtful writing had to come from some place. Some….where. so I asked her if she could speak to her 12 year-old self, what would she say. She was kind of taken aback by the question yet knew exactly how to answer, “Slow down. Be a kid. Make good decisions and be there for your family, probably. I had a very troublesome teenage experience and it wasn’t fun for me. But my 12 year-old self would be exactly the person that I would want to say those things to because it was the beginning of a very long and treacherous teenagehood.”

Despite these hardships, Jessica is coming out on top. She is growing and evolving as an artist and more. ” I feel like just as a person in the last 18 months I’ve grown so much and I’m the better for it. I really am. That wouldn’t be possible without the people in my life. I’m very lucky, man. Very lucky.”

What else can I say about her besides if you aren’t listening to her, you are crazy! You should be following her on all of her socials because she loves to post music every now and then:

Just so you can become more familiar with this incredible woman, here is Workin’ On Whiskey by Jessica Mitchell: